Coming home from our socially distant walk yesterday and reflecting on the current crisis in the world, my husband mentioned that when he was a little kid and didn’t feel well he would draw pictures of armies to fight the sickness.  I was immediately reminded of a similar scenario in my home where my sister would illustrate her tale of the Good Guys and the Bad Guys.  She would get pencil and paper, sit down beside me and told the story as follows:

Here you are sick with lots of bad guys outnumbering a small number of good guys.

Then you take some medicine and the it knocks some of the bad guys out and more good guys enter the scene. (When she crossed out the bad guys, she made a noise like BOOM, BAM).

Now you get some tea and/or soup and even more bad guys go away and more good guys enter the picture.

Now you are all better. The bad guys are all killed off and shrinking in size and the good guys are numerous and large.   The good guys prevail! 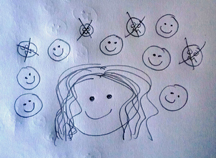 As we all take precautions, may your Good Guys always outnumber your bad guys!

9 thoughts on “The Good Guys and the Bad Guys: An Old Family Remedy”